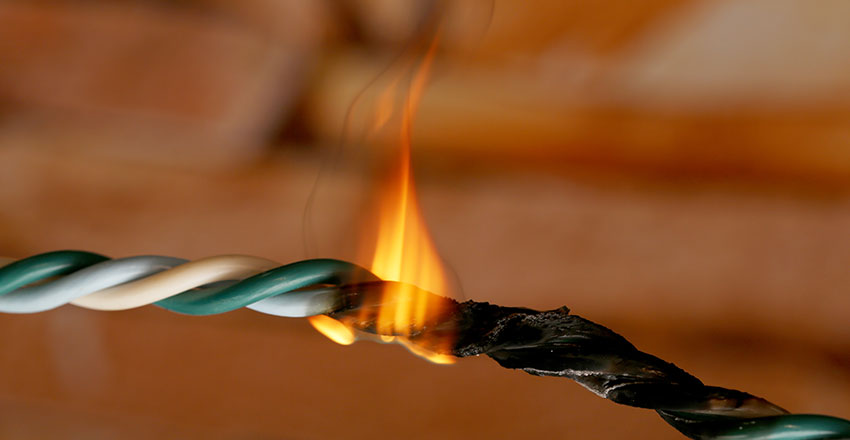 Cable manufacturers must evaluate a range of properties when selecting a product as an insulating or cable sheathing material; properties such as electrical performance, mechanical properties including tensile and flexural behavior and, of course, the overall system cost. Another key parameter in the selection process is the fire safety of the cable – particularly the flame retardancy of the insulation/jacketing material.

Flame retardancy can be achieved in a number of ways. For example, the addition of halogen compounds (frequently used in combination with antimony trioxide) acts as radical traps inhibiting the free radical chain reactions involved in decomposing the polymer into combustible gases; or the use of intumescent formulations which form a protective layer of foamed char which retards the burning of the polymer insulation; or the addition of hydrated mineral fillers which dilute the concentration of flammable material and decompose below the ignition temperature of the polymer when exposed to heat, releasing water and removing heat from the fire source. In view of recent European legislation, there are a growing number of wire and cable applications requiring the use of halogen free or non-PVC insulation or sheathing materials. This has led to the growth of halogen free flame retardant (HFFR) formulations based on the use of ethylene copolymers and hydrated fillers such as aluminium hydroxide (ATH) or magnesium hydroxide (MDH). In addition to reducing the amount of organic material that can decompose, hydrated mineral fillers function by the principle of an endothermic or heat sink effect combined with the dilution of the flammable decomposition gases by inert water vapor. Considerable amounts of heat are extracted from a fire scene as the hydrated filler decomposes. A protective layer made up of aluminium oxide or magnesium oxide and the products of carbonisation forms on the surface of the plastic further hindering combustion. This protective layer may also reduce smoke density by absorbing soot particles. The use of hydrated mineral fillers in polyolefin wire and cable formulations suffers from a number of drawbacks, the majority of which stem from the very high incorporation level of mineral filler necessary to meet fire retardant specifications such as UL-94 or IEC 60332. To achieve any worthwhile level of fire performance, filler loadings of up to 65 weight percent (wt.%) in polyolefins are not uncommon. At this addition level, the filler has a drastic effect on the system properties and leads to compounds with a high specific gravity and limited flexibility in addition to low mechanical properties, especially elongation at break. Problems during compounding may also be observed due to the increased viscosity of the formulation. In view of such effects, the choice of polymer is critical in achieving high performance HFFR cable insulation and sheathing compounds. In essence, the polymer of choice must be able to accept a high loading of flame retardant filler with a minimal loss of mechanical properties.